Did you know that kids grinding teeth in sleep (otherwise known as bruxism) is more common than you might think? In fact, according to Kids Health.org as many as 2-3 out of every 10 children suffer from teeth grinding, technically known as bruxism.

Of course, when you peek in on your sleeping child, you’ll want to hear sounds of sweet dreams: gentle breathing and perhaps the occasional sigh, but if you hear sounds of gnashing, clenching jaws and teeth grinding then there’s no getting away from the fact that it can be alarming. So what exactly is bruxism, and more importantly, what causes a child to grind his teeth at night?

Bruxism is, in essence, the act of unconscious or habitual teeth grinding. It can happen at any time, but particularly when the child sleeps.

Whether your child is going through the ‘terrible two’s’ or adolescence, nervous tension, frustration, or anger is never far away. A simple change in routine can cause sufficient stress in some children to bring on an outbreak of bruxism. Even everyday arguments or tantrums can prompt a bout of jaw clenching or teeth grinding.

It’s also thought that certain types of hyperactivity have a direct link to kids grinding teeth in sleep. For instance, those with ADHD (around 3-7% of school-aged children) were more likely to experience sleep problems including bruxism. In fact, one study revealed that symptoms such as bruxism occurred irrespective of the severity of their ADHD

Kids often experience pain from earaches or teething, and in response to this, some may resort to teeth grinding. However, on the whole, experts believe that most kids outgrow this type of behaviour.

According to recent research, there appears to be a correlation between digestive parasites such as pin-worms, tape-worms and Giardia and teeth grinding, although evidence is not entirely conclusive. It’s still uncertain whether parasites cause bruxism or simply exacerbate an existing problem. However, one thing we do know is that there is a close connection between the gut and the brain via the Vagus nerve. it’s possible therefore that any kind of invasion may send signals to the brain to trigger the bruxism process.

So now we have an idea of the main causes of grinding teeth while sleeping, solutions need to be found. However before we go into how to stop teeth grinding, what are the signs of teeth grinding in children?

As we’ve already mentioned, lots of kids who grind their teeth aren’t even aware that they’re doing it and in many cases, children feel no ill effects, However, in others, bruxism can wear down tooth enamel or cause tooth chipping and sensitivity. In worst case scenarios it can cause painful jaw problems like temporomandibular joint disorder (JMJD) 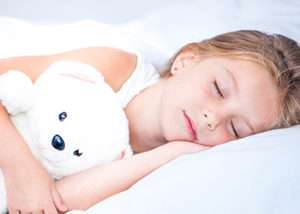 The vast majority of kids will simply grow out of it, but a combination of parental watchfulness (looking in on their kids while asleep) and regular dental visits will keep the problem of bruxism in check until they do.

In other cases where damage caused by kids grinding teeth in sleep is more prevalent, then dentists may prescribe a special night guard which is worn over the teeth – similar to an athlete’s mouthguard – during sleep. In others where the problem may be more psychological, then getting your child to feel relaxed before bedtime is key. If the issue is more complicated, then try to get to the bottom of the child’s concerns and try to alleviate their fears. Finally, if that doesn’t help and bruxism is still apparent, then a visit to the doctor for a digestive evaluation may well be a good idea.

If you’re concerned about kids grinding teeth in sleep, then come and talk to us about how to help your child’s bruxism. Contact Infinite Point Cook Dental on 03 8595 2630 and book a consultation with our experienced team today.

When Are Dental Implants Better Than Dentures?

How To Find A Dental Plan That Pays For Implants

What Kind Of Results Can You Expect With Teeth Whitening?

Dental Checkup and Cleaning Cost – What Price Do You Put On Good Dental Health?